The history of the Dead Road

Gulag Construction No. 501 and No. 503, Salekhard–Igarka Railway

The construction of the railway began in 1947 and most of the workers (up to 100,000 according to some estimates) comprised prisoners from Gulag labour camps. In winter, bitter cold; in the summer, clouds of mosquitoes, a lack of equipment and food, slave labour, primitive technology, violence, tyranny, death… These were the conditions that prevailed on this insane building project that had been personally ordered by Stalin. In the post-war period, it was clear to almost everyone in the leadership of the USSR that prisoners’ slave labour in the corrupt Gulag system was wasteful and desperately inefficient. Only Stalin failed to realise this and he was obsessed by similar construction projects. To this day, it is still not completely clear – even to Russian historians – what made him want to link the uninhabited and hostile environment of Siberia’s Polar regions by railway. It was most probably for strategic reasons.

The northern part of Siberia was virtually unprotected from a military point of view. A railway that was passable all year round, culminating in a deep-sea port by the Arctic Ocean would have changed this situation. After all, fanciful plans for linking the regions of northern Russia with the Far East had already existed under the tsar. At that time, nothing was known about the richest deposits of Russian natural gas located in the region which have seen the railway undergo new development.

The railway was originally meant to link the already existing line (also built by Gulag prisoners) from Moscow to Vorkuta (from the Chum station in the Polar Ural region) with a port at the Gulf of Ob near Mys Kamenny. On 22 April 1947, the Soviet ministers of the USSR issued an order to the Ministry of the Interior and the Gulag administration to immediately begin construction of a massive deep-sea port, docks, an adjacent city, and a railway, which would link the port with its hinterland. 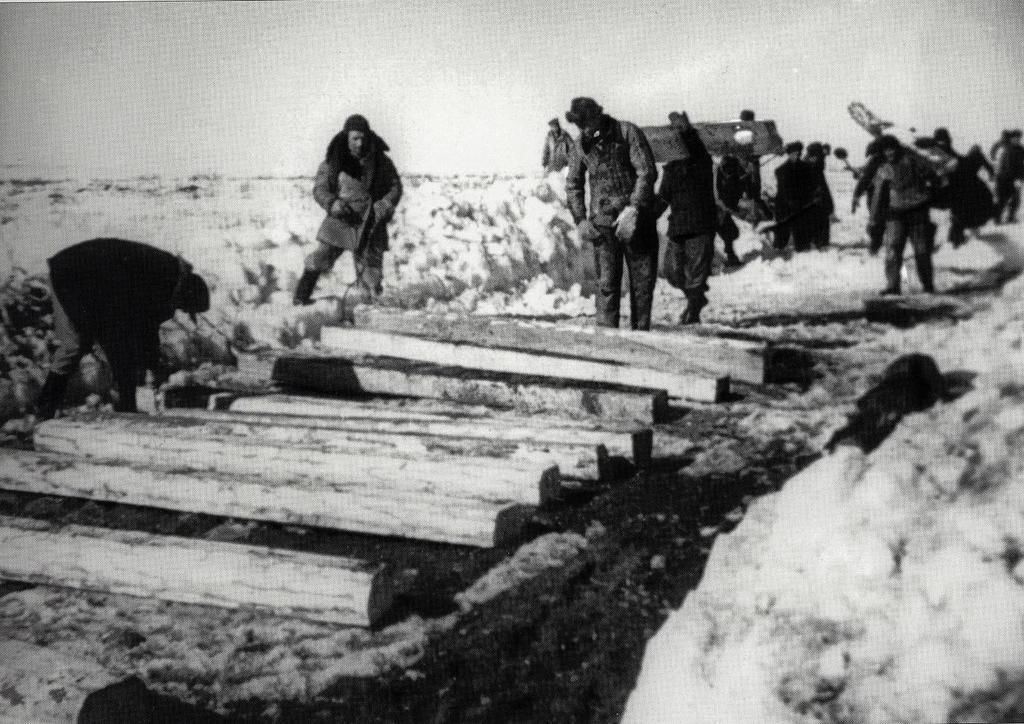 Due to the great haste surrounding the project, the actual construction itself began alongside preparatory and planning work, which led to the tragic absurdities that are only possible in a totalitarian socialist state. After nearly two years, when work on the construction of the railway through the Polar Ural was in full flow and several Gulag labour camps stood in the Mys Kamenny region, it was discovered that the water in the Gulf of Ob was too shallow and that the entire coast was totally unsuitable for the building of a deep-sea port. Apparently, this was down to a mistake by Russian cartographers, who changed the name of the gulf in the language of the indigenous Nenets population – instead of “pas” (crooked) they had understood it as “paj” (stone)...

Stalin, however, did not give up on the plans and ordered the railway to continue along the Arctic Circle as far as the banks of the Yenisei River, to the city of Igarka. Despite the fact that Igarka is located 250 kilometres from the mouth of the Yenisei, the great depth of this mighty Siberian river allowed for the construction of a deep-water port there. All that was needed for the construction of the transpolar railway to continue was to drive tens of thousands more prisoners into the Polar marshlands, tundra, and taigas. The planned length of the line now amounted to 1,459 kilometres.

The technical conditions for the construction of the railway were extraordinarily difficult, if only because of the inaccessibility and bleakness of the locations where the line was supposed to go (apart from a few villages that were home to the original Siberian nations – the Nenets, Selkups, Khanty, Kets, and Evenks – there were no settlements in these places). The entire line runs along permafrost, on which it is difficult to build anything. For most of the year, the ground is frozen and covered with snow. During the short summer, the upper part of the soil melts and changes into a marshy surface. Moreover, the line was to cross two great Siberian rivers – the Ob and the Yenisei. No bridge construction was planned for these – in the summer, transport was arranged using special river ferries; in the winter, tracks were laid on the ice of the frozen rivers.

Building was done hastily without the necessary technical backup. “Try sawing through a rail by hand with two people. We did it that way, and it was terrible work,” the former prisoner Aleksander Snovsky recalled. “In order to meet standards in the construction of the embankment, we also threw down branched trees there to bulk it up.” If we factor in the impact of the melting permafrost, it is no wonder that the railway required constant maintenance, repairs of damaged sections, and the pace of work on the parts in operation was minimal.

In comparison with the Gulag camps of the 1930s and 1940s, however, the living conditions of the prisoners on the construction were just a little bit better. The extermination of “enemies of the people” was no longer an absolute priority. Former prisoners of the Dead Road have spoken of this in their testimonies. “They generally fed us well – 900 grams of bread a day, a large bowl of porridge (primarily grits),” recalls Vasily Basovsky. “When you met the standards to 150 percent, they even added pork, salami… I worked on the construction of bridges and the standard was strictly monitored. It was necessary to fulfil it, and anyone who wanted to go beyond that had no limit placed on their working hours. And it was in our interest to work well – after all upon exceeding the standards on a long-term basis, they counted one day of work as three. In this way, instead of seven years, I served three.”

In the camps’ annual reports, there are even records of how some overseers were stripped of their rank and brought before the courts for frequently beating prisoners. “One time, for about a year and a half, they even allowed us to receive money for the work. Not much, but still…” recalls Sergo Lominadze, another of those prisoners who worked on the construction of the railway. “And in the camps, there were even little shops where it was possible to buy butter, sugar, and other groceries. We were even generally well clothed.”

Nonetheless, this still doesn’t mean that staying there was pleasant. There were temperatures of up to minus 50 degrees celsius in winter and clouds of mosquitoes in the short summer... Political prisoners were often bullied by old lags. “We worked in an administrative brigade, and that was a big difference in comparison with the brigades who worked on the railway,” says Lominadze who came to the railroad with six years of experience working in camps for rail constructions in the Far East and in Mongolia. "Working on the construction of the railroad in cruel frosty conditions couldn’t be withstood for more than six months, perhaps a year,” recalls Sergo Lominadze. “So if you wanted to stay alive you had to find a way around these conditions somehow, either by getting into the infirmary or finding work doing camp maintenance. In short, it was hard to survive the common work on the construction, even though, at least according to my experience, it wasn’t as gruelling as at other Gulag building projects.”

The construction of the line was divided into two parts – the western part (officially Gulag Construction No. 501) and the eastern section (Gulag Construction No. 503). In the western 501 part, besides the still-used 200-kilometre section across the Polar Ural from Chum Labytnangi on the left bank of the Ob, tracks were laid between Salekhard and Nadym (380 km), and a causeway to Novy Urengoy was also built (more than 200 km). In view of the difficulty of access, the eastern 503 part did not enjoy the same “success.” Trains only ran on the Bolshaya Bludnaya – Yanov Stan – Yermakovo section (150 km), a 20 km section by the Taz River, and 60 km to the south of Igarka. In the remaining sections, only a causeway was built or construction did not commence at all (a section of around 300 kilometres between the Pur and Taz rivers).

Immediately after the death of Stalin (5 March 1953), the new leadership of the USSR found the construction to be completely ineffective and work on it was quickly halted. Until the 1990s, maintenance workers for telephone lines, which had been laid along the tracks, rode the railway in handcars along the western section from Salekhard to Nadym. The central section between Nadym and Novy Urengoy was gradually restored from the 1970s and connected from the south to the Russian railway network thanks to the huge deposits of natural gas in this region (which had not been known about, however, at the time of construction). At present, within the framework of developing the gas fields, the renewal of the railway between Salekhard and Nadym is being planned. According to preliminary agreements, this should even be carried out by the Czech company OHL. Nonetheless, according to unverified reports from 2013, the implementation of this section has once again been postponed.

The eastern part of the construction, however, remained completely abandoned. Only in the 1960s were tracks torn out on some sections. Municipalities built for the needs of constructing the line (e.g. Yermakovo on the banks of the Yenisei, which was home to 15,000 in its day) were completely abandoned and the labour camps along this section remained practically untouched, standing to this day as a reminder of Stalin’s reign of terror.

In August 2009, we organized the first expedition to section no. 503. Its starting point was Igarka, from where we took motorboats to the abandoned town of Yermakovo by the Yenisei. From there we travelled around 20 kilometres along the causeway of the former railroad. At the same time, we mapped out three camps.

In March 2011, we covered the entire 350-kilometre stretch between the towns of Nadym and Salekhard (section no. 501). We used a snow transporter, which we used to travel along the so-called winter road (modified frozen tundra, lakes, and marshes), which follows the route laid out for the railway. In the course of this journey, we documented five abandoned railroad camps

In September 2013, we went back to section 503 and in three weeks we mapped 10 camps on the Bolshaya Bludnaya – Yanov Stan – Yermakovo section. The panoramic photos used in the virtual tour of a camp on the Dead Road were taken on this expedition.

List of publications and sources which were used for the creation of texts and content of the Gulag.Online Museum.